Sometimes, in the midst of the turmoil... after a long day... way past regular bedtime... in the middle of a Peter Rabbit story... there comes a moment of pure contentment. When everything seems right in the world, and the most important things are all within your grasp.

I cherish those moments.

Posted by Amanda Conway at 9:37 PM No comments:

Large and Not so in Charge

One of the things that scared me most from the time of Tony's diagnosis was the idea of being a single parent. Of course, the loss of Tony impacts my life in a thousand ways... but I'm just going to focus on this one part right now.

Not too many people set out to become single parents, and it's usually an unpleasant situation that makes them one. I certainly know I am not alone, and I don't know anyone who would say that being a single parent is easy. Knowing that does make me feel a little better, but it doesn't make the job any easier.

Right now, I have a lot going on. I'm organizing for the Conway Cup, I'm helping organize an event at Louise's day care, I'm on a board... and maybe I got myself in over my head. But the thing that seems to wear me down the most is parenting. I love my girls more than anything, and I can't imagine what life would be without them... but sometimes the thought of a weekend when we have nothing planned scares the daylights out of me. How am I going to survive those two unstructured days?

They fight, they ask for things, they want to watch TV, they play nicely together, they want to watch TV, they are bored, they ask for things... and repeat, repeat, repeat. That just covers the first hour they are awake. I am thankful for every day that I have with them, but I feel like I need to go to bed about 15 minutes after they do. (If you try to call me after 8:30, you've probably called too late)

The future is a dim and murky place and when I think about wrestling two girls through adolescence by myself... urgh. I won't even go there. I suppose some things will get easier... I won't always have to make their breakfast and wonder what disaster they are creating when they get quiet. But, other things will get harder.

I know I'm lucky to have them. I know I'm lucky I don't have to work right now. I know I'm lucky they have good schools to go to. I know I'm lucky in so many ways... but I'm also tired, so tired... and I know I'm earning those grey hairs I'm starting to see. I guess you can be lucky and worn out at the same time, and that's me. I hope it's not this hard for 14 more years... one day at a time has gotten me this far though...
Posted by Amanda Conway at 1:40 PM No comments: 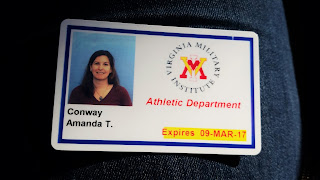 The Conway Cup was probably Tony's favorite day of the year. The smile never left his face on that day, and he loved every minute of it. Even when it became hard for him, he wanted to be there all day.

Last year, he died the day before the Cup was scheduled, but we had already made the decision to postpone due to looming weather. It snowed at least a foot that day. We rescheduled for April, but most of the original teams couldn't make it so it was a much smaller Cup. It was still a great day, though.

It's a lot of work to put together a soccer tournament for up to 50 teams, and although I have helped with it every year, I have always just been Tony's assistant. In preparation for the 2016 tournament, I have been working as hard as I can to get it right. I know I want it to go well for Tony, I want him to be proud of me for pulling it off. But I also want it to go well for the cause, celebrating Tony and raising money for ALS.

We made a decision to hold the tournament in April this year, instead of late February. Presumably, the weather will be better, and I wanted to be away for the weekend Tony died, instead of hosting a soccer tournament. We knew it was a gamble on whether or not the teams would show up.

So now, we are one month away from the tournament and we only have six teams registered. I'm starting to wonder if the Cup will happen at all. I have been stressing about it big time, but I had a moment of zen last week. If the Cup doesn't happen, I will be disappointed, but I will not be defeated. I cannot make 50 teams register by force of will alone. And we can try again next year (maybe in February).

It's probably some part of the state I am in to focus (bordering on obsession) on an event like this. It represents Tony's legacy, but it isn't the only part of that legacy. I'm hoping more teams will roll in, and we'll have a great day in April. If not, I know I tried (really hard).
Posted by Amanda Conway at 10:02 AM No comments: