We took delivery of an new mini-van today.

Amanda's older van was showing its age, and we really needed to get something better. In another instance of having to project how my symptoms will progress, we decided that a wheelchair accessible van was the sensible choice.

We began doing research a few months ago, and gradually became acquainted with the makes of van that are typically used, and the various seating arrangements that are used. 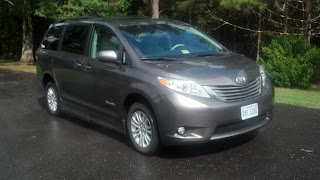 Our van is a used Toyota Sienna, with a side door ramp conversion by Braun Mobility. The side door conversion means that the middle row has been removed, but the back row remains. The missing row gives flexibility with where the wheelchair can be located while the back row provides ample room for Cora and Louise.

The van, as you can see, looks like a regular van. In truth, the van has undergone an extensive refit. The entire floor was removed, and a lowered considerably. The suspension has been beefed up, and a feature has been added to allow the side of the van can lower and make the ramp incline at a manageable angle.

I wasn't looking forward to telling Cora about the van. How would I explain the ramp?

As it happens, Amanda and the girls picked me up from VMI after practice. Cora caught players as they were leaving the field, and proceeded to show off the van and the ramp to everyone!

A lot of people deserve our thanks for helping to make this possible; thank you.