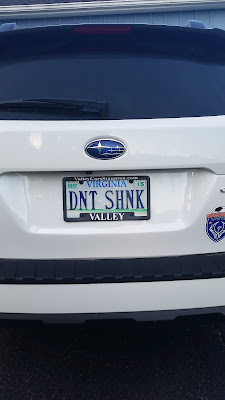 Yesterday I sold our van that was converted to use with Tony's wheelchair. I was a little sad to see it go, but very glad it's no longer sitting in the driveway.

So I finally got to put permanent plates on my new car.

From the time I started driving until we bought the converted van, the license plates I had were "Abbie Rd." (The closest spelling my mom could get to acknowledge my Beatles obsession) Everyone knew me by those plates, and it was hard to let them go.

But Tony's plates were "Dnt Shnk," an abbreviation of the title of this blog. And they were a better fit for the van.

I watched him spend those years "don't shrinking" (grammar apologies), and his spirit still astonishes me... but now it's my turn to "don't shrink." So as I face the uncertainty and fear of this new life, I'll have that additional little reminder of Tony and the special life we have.

Thanks for the lesson, babe, and the swell license plates!

Happy 13th anniversary to the man of my dreams. You made me the luckiest woman in the world when you married me, and I'm still the luckiest because you loved me.

I went looking for a post you made with a particular song, and it turns out it was for our anniversary last year. You used to play this song when you couldn't tell me how you felt... and I'll never forget that when I listen to it.

I miss you babe, and all of me still loves all of you.

To the Soccer Boys

You know who you are. If you are 18 or 50, you will always be known by that term in our family!

It was one of Tony's greatest joys to be an assistant coach to the VMI Men's Soccer team; and while I knew he loved soccer, it took me awhile to fully understand why.

As I have gotten to know the players better in the last few years, it has become abundantly clear. The first time l really hung out with any of the players was when two came for dinner during summer school. Immediately, their conversation was a shock to the system... something Tony would maybe describe as "goofiness." They talked about the most random things, and made the silliest jokes. For us, deep in the battles of raising small children, adulthood, and the looming presence of ALS... they had an amazing effect. I hadn't laughed so hard or felt so light in a long time.

Since then, our connection with the Soccer Boys has only gotten deeper. We host the whole team for dinner at the beginning of the season, they visit with us throughout the , and Tony and I even spent a few Friday nights eating out with a couple of them. They have a standing invitation to come over, and I'm so glad they do.

So not only have they brought an injection of light into Tony's and my lives, but they are the sweetest, most attentive big brothers to Cora and Louise. It would take me days to list all the incredible kindnesses I have seen the Soccer Boys show to the girls. They never say no (although maybe they should sometimes), and suffer through the endless demands of Cora and Louise's imagination.

They were always there when we needed them, to cut the grass, or move a ridiculously heavy hot tub... but since Tony died, they've been even more supportive. I treasure a VMI flag they signed for me, they give me huge hugs when I see them, and I was flabbergasted to receive Mother's Day flowers from one of them (which made me cry buckets, but in a good way).

Yesterday was the conclusion of VMI's graduation week, and I'm beyond proud of the recent graduates and their achievements. It was hard to be there without Tony, Richie, and Kellie, but I wouldn't have missed it for the world.

And it's not just the Bhoys themselves, their families have also been incredibly supportive. They helped support us so I could stay with Tony, they fed us, and always made us feel welcome.  During graduation week, we were treated like members of the family, and invited to dinners, parties, and ceremonies.

As this post grows longer and longer, I know there's not enough I could say to fairly represent these wonderful young men and their families. It is a special person who can make it at VMI, and an even more determined one to be an athlete there... so out of a group of already exceptional people, these are the most big-hearted guys I have ever known.

Posted by Amanda Conway at 10:38 AM No comments:

Two years ago this week, we had dinner with Michael and Libbi Jaillet in Washington, D.C. We had "met" the Jaillets through the Twitterverse of Steve Street, a veteran, a pALS, and a man who seemed to defy the odds when faced with ALS.

I'll always remember Steve's last tweet: I feel like a dirty diaper (at least something like that). With in a day or two, he was gone. Although we had never physically met him, it was a huge shock when he seemed to go so quickly. He was one of our first ALS Twitter friends.

Libbi and I seemed to bond quickly after that. We found ourselves in similar circumstances, and with similar mindsets. She and Michael came to D.C. to participate in the annual ALS Advocacy Day, and we jumped at the chance to meet them face to face. They had started a charity in Austin, Texas to help other ALS patients... not themselves. They would gather volunteers to do yardwork, decorate for Christmas, and many of the things that are lost in a life filled with terminal illness. They also held a large fundraiser each year to raise money for ALS research.

The dinner was the Jaillets was great. It felt like we had known each other for years, and I remember the evening like it was yesterday. You and Michael were both walking and talking easily. Michael couldn't use his right arm very much, but seemed to get on well with the left. I was helping you eat, but that was about it. We had dinner and drinks and parted with the warm and fuzzies.

It's now two years later, and you are both gone. So much has happened since then, but it still seems like yesterday. Libbi remains my most frequent contact for anything related to ALS, widowhood, sadness, an evening drink, depression, grieving, etc. I don't know how I would have made it without her. Our support group was and is mostly the people we have met digitally, and the Jaillets are the top of the list.

Their non-profit is MJ's Army. They do amazing things, and they inspired you to try to create a non-profit here to help people with terminal illness. I'll try to continue that project in your memory. Someday, Libbi and I will get together, have a few drinks and talk about all that has happened. I look forward to it greatly.

But all of this makes me wonder... how can something so wonderful come out of something so truly horrible? It is important for us all to remember to take full advantage of what we have, and never miss the opportunity to make a new friend. Thank you to the Street family, and the Jaillets for everything you have done and continue to do!
Posted by Amanda Conway at 10:44 PM No comments:

We're starting to tick through holidays without you, and today is my first Mother's Day without you.

Last year, I was really frustrated on Mother's Day. I dressed up, and you didn't say anything. I wanted you to send me an e-card or an email with some sweet words to mark the day. I pestered you about it, and you did write me an email. You told me how frustrated you were because you couldn't give me the day I deserved.

That wasn't what I was after at all... I didn't care a lick about not getting breakfast in bed. All I wanted was some attention from you. I wanted you to do what you could do better than anyone, no matter your condition... make me feel special.

I know that your failing body frustrated you endlessly, and I'm sorry I was being selfish. Everyone needs a little special attention sometimes. It's hard to be a care giver, but I still feel a bit guilty.

So this Mother's Day, I wear the mother's necklace you gave me and your wedding band. I miss you. I'll look at the pictures of our time together. I'll spend time with the beautiful girls we made. And I know I'll never forget how special you always made me feel.

I love you always and thank you for making me a mother! 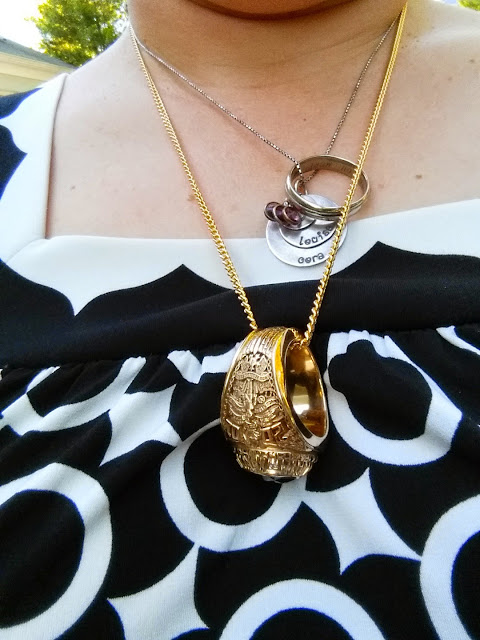 I seem to be in a bit of a funk. I can't really say when it started, and it's not an all day thing, but it's also not usual for me.

I'm sure it's normal, and I'm sure it's to be expected. What I need to figure out is how to fix it. I was pretty good at improving Tony's mood, and he was always the best at improving mine. Perhaps that's the clue... the guy who could always cheer me up isn't here.

I guess that leaves me with some work to do... find that mood-o-matic that can get me back on track.

I'll let you know what I discover.

The following was sent to me by our friend, Tammy, who lives near us and has ALS.

We came to know each other because faulty wiring in our brains delivered this nasty disease called ALS. Scientists don't know how to reset the connections between our motor neurons and our muscles. All we can do is manage our symptoms and try not to be held hostage by our emotions. Amanda left her job to take care of you and your sweet girls. Jim stayed home to take care of me. I think you'd agree with me that Amanda and Jim suffer through our ugliest moments. I think all four of us agree that the best of people saves us from the worst of ourselves.  Tobii, our eye gaze computers, keep us connected with the world because our limbs and voices fail us. Your Tobii is newer and faster than mine. I accepted Amanda's generous offer of your Tobii and mine will go to the ALS Association loan closet. All the tools we acquired to manage ALS will find homes with others. Amanda admitted to you how difficult it was to let Tobii go. It has been adapting your life with ALS like no other tool can. But Amanda couldn't erase all traces of you from Tobii. I find you in the unfamiliar software. But, what is most special is seeing you in the word prediction software. It still carries your voice. Thank you.
Posted by Amanda Conway at 9:30 AM No comments: