Rosa Hoskins, daughter of Bob, wrote a moving piece about her father's passing today. I thought I'd share.

The page took forever to load, so I've copied the text below


My darling Dad has died. I loved him to the ends of the earth and he loved me back just the same. These are the lessons he taught me, I will keep them close to my heart and remind myself of them whenever I stumble or falter. They are his words; the words spoke so often to encourage, comfort and reassure. This isn’t general wisdom, rather advice that he tailor made just for me. I love you Dad.

1) Laugh. There’s humour to be found everywhere, even your darkest days there’s something to have a joke about. Laugh long and loud and make other people laugh. It’s good for you.

2) Be yourself. If someone doesn’t like you they’re either stupid , blind, or they’ve got bad taste. Accept who you are, you’ve got no one else to be. Don’t try to change yourself, there’s no point. Don’t apologise. Don’t make excuses. Be yourself and if anyone else doesn’t like it they can f*ck off.

3) Be flamboyant, it’s who you are and always have been. Be eccentric and unique. Don’t try to adapt yourself to someone else’s view of normal. That belongs to them, not you. Like yourself as who you are.

4) Don’t worry about other people’s opinions. Everyone’s a critic, but ultimately what they say only matters if you let it. Don’t believe your own press. People can just as easily sing your praises as they can tear you down. Don’t waste your time on things you can’t change. Let it slide off you like water off a duck’s back.

5) Get angry, it’s ok to lose your temper now and then. If anger stays in, it turns to poison and makes you bitter and sad. Get angry, say your peace, then let it go.

6) What ever you do, always give it a good go. Don’t be afraid of failure and disappointment. If you fall flat on your face then get straight back up. You’ll always regret not trying. Disappointment is temporary, regret is forever.

7) Be generous and kind because you can’t take it with you. When you’ve got something to give, give it without hesitation.

8) Appreciate beauty, take pictures and make memories. Capture it, you never know when it’ll be gone.

10) Never, ever, ever, ever give up. Keep on punching no matter what your up against. You’re only defeated if you give up, so don’t give up.

11) Love with all your heart. In the end, love is the only thing that matters.

We bumped in  to a friend at the grocery store yesterday. It was a very pleasant encounter.

One thing did catch my eye during our conversation; a general look of pity or deep concern on our friend's face during the conversation. The lady we spoke to is extremely caring, so I don't take the face in a condescending way.

Earlier that day, my caregivers from hospice were over to give me a shower. I'm usually fairly jovial during their visits. It makes the reality of the situation a little less stark. Plus, an awkward silence seems to multiply in intensity when someone is cleaning out your crack.

On a far more serious note, one of my caregivers apologized and said she might not make it to my appointment on Wednesday. She told me that it would depend on whether her mother passes away in the next two days.

The juxtaposition of the two encounters got me thinking about... 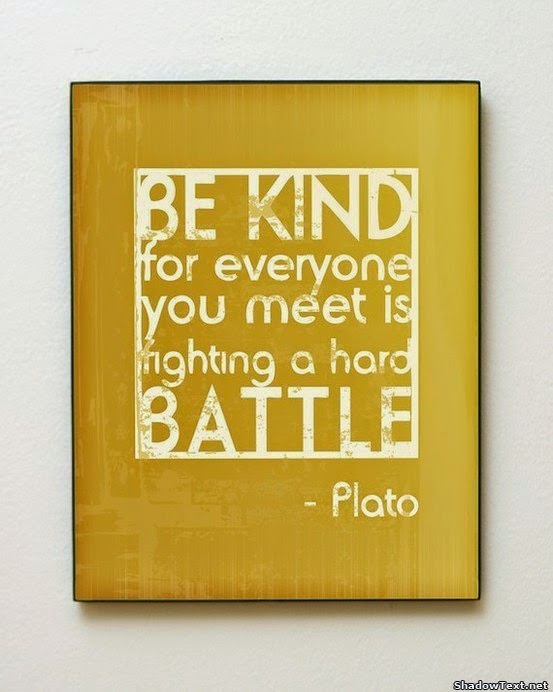 Huge congratulations go out to my Dad, and everyone involved with the "Tony's Huddle" team at this Saturday's ALS walk.

I'm sorry I couldn't be there. But the pictures from the event were uplifting and empowering for me. I hope the event evoked similar emotions for you. 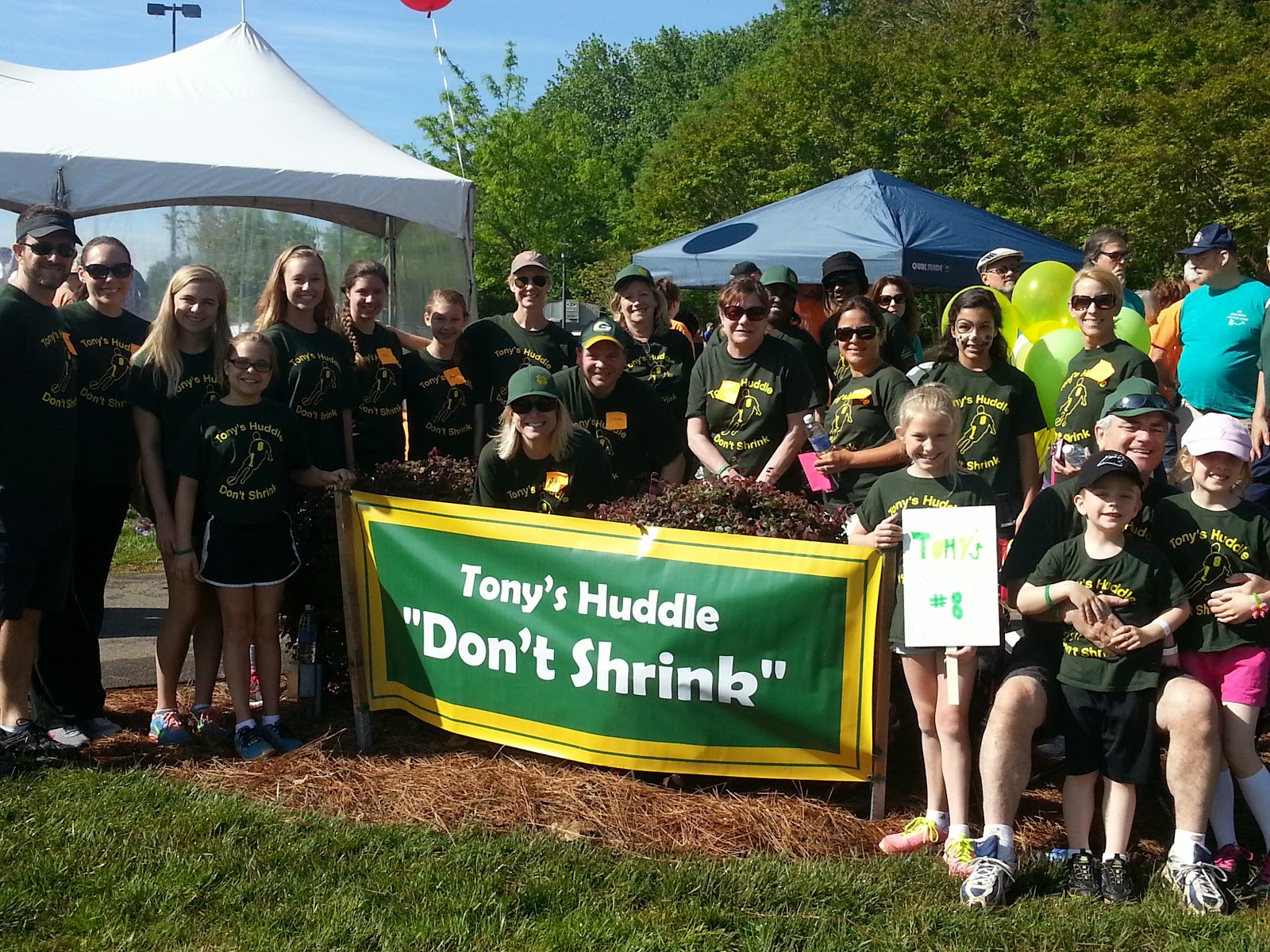 I recently spoke to some folks that I know read my blog. When I mentioned my prognosis from my clinic visit in February there were quite a few people that hadn't heard the news. It was buried as the last sentence in a blog post, so I suppose I shouldn't be surprised it was missed.

More recently, I have been taken under the wing of our local hospice. The decision to seek hospice care came about as my Doctor-ordered home care reached the limit of what my health insurance would allow. I feel fortunate, since we have a well-developed local hospice that receives a lot of support from the local community.

It has been a smooth transition, and the standard of care I've received has been fantastic.
Posted by Unknown at 12:14 PM 4 comments:

Really, the only time I'm on my feet is when transferring from one seat or position to another. Even then, the gait belt is on.

I lost my balance, or slipped, or buckled during a transfer in to bed. 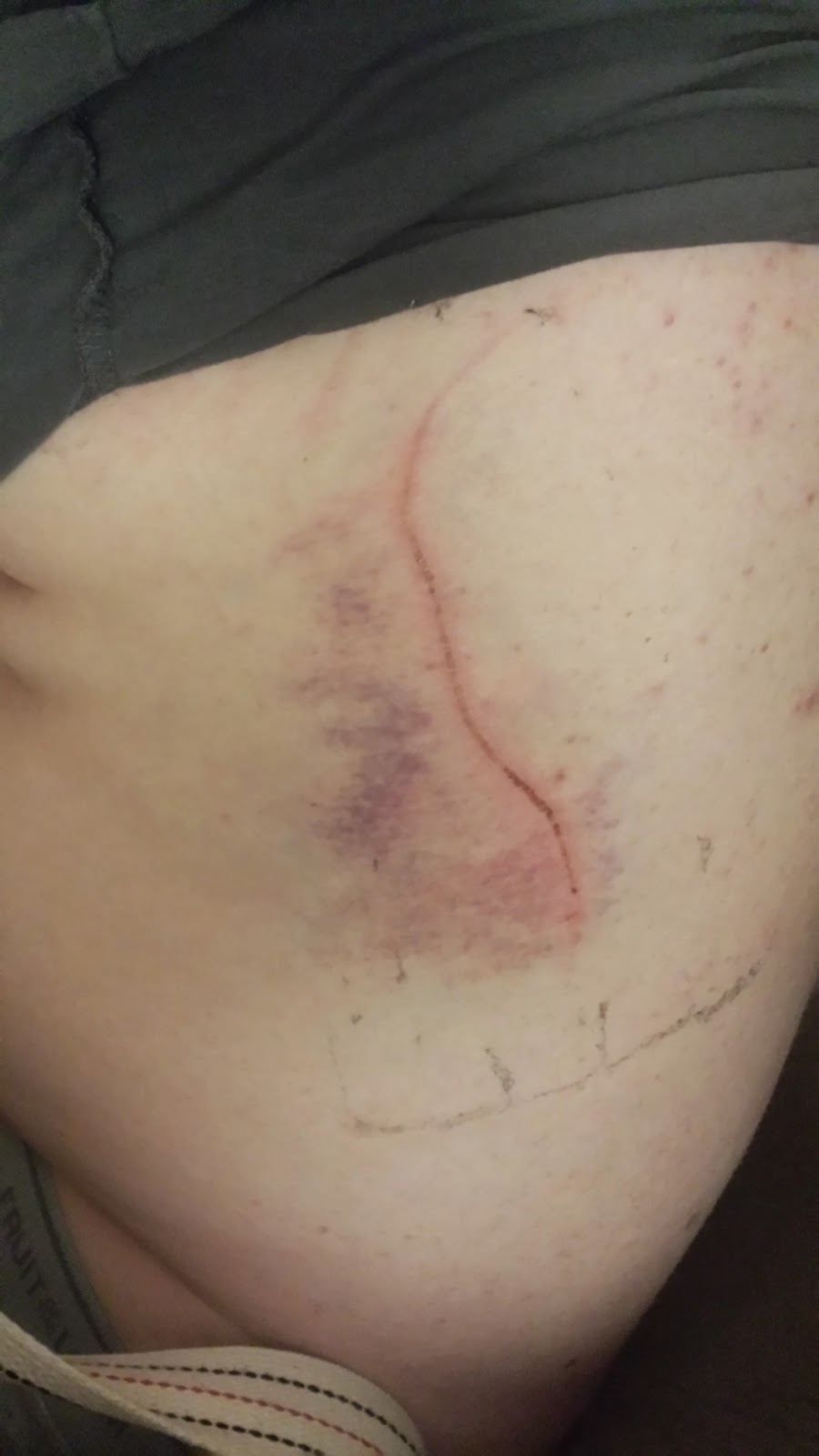 Amanda, never letting go of the belt, tried to break my fall. I hit the corner of my nightstand on the way down, and received this scratch (right).

Even though it looks pretty bad, my pain level was negligible, so we patched it up and went to bed.

A day later I was pissing blood. Someone with a title that ends in -ologist can tell you what organ I hurt; I think it's my oil filter.

Things are back to normal now, though the scratch and some wicked bruises remain.

Email ThisBlogThis!Share to TwitterShare to FacebookShare to Pinterest
Labels: Falls

Insight on the pitfalls of drug trials and ALS from NPR

Email ThisBlogThis!Share to TwitterShare to FacebookShare to Pinterest
Labels: drugs

Amanda was helping me sit down -- on the porcelain throne, if you must know -- as part of my evening ablutions. For some time now we've accomplished transferring me from one seat to another using a gate belt. For the uninitiated, a gate belt is about the same width as a car seat-belt, with a simple clasp, but it's made from material with a much thicker weave. It quickly goes on, and gives your caregiver a solid point, close to your center of gravity, to leverage you up and ease you down.

About four years ago, I was sitting on our couch, while Cora climbed on our recliner. As I watched her go back and forth from one armrest to the other, I suddenly felt like she was about to lose her balance and fall. I honestly couldn't tell you if Cora fell first, or if my backside was off the couch first. Either way, with a dive I was able to get a hand under her head, and cushion her from the hard landing.

Amanda sat me down and took a step back, taking half a stumble-step as she did so. I had the same feeling in that moment with Amanda as I had with Cora years ago.

Sadly, the physical response was completely different. My limbs, hardest hit by ALS,  had a minor jerk in response to my urgent desire to get up. It was a solemn reminder of how far I've come in my journey, and a completely shitty end to the day.

We've been trying to potty train Louise for some time now. Louise has figured out peeing, and has slept through the night without an accident several times. She uses the potty frequently...to pee. Pooping has been much harder to train.

Out of frustration, I suggested good, old-fashioned bribery.

An inexpensive rotating lamp was purchased, and placed on a prominent shelf. The simple deal was explained to Louise: Make a successful deposit in the potty, and the fancy lamp is yours.

The message was well received. Louise got on the potty as soon as we got home.

It would be another two days before she made a successful deposit, but she did it.

I remember the same milestone for Cora. Amanda and I tried to almost celebrate her accomplishment, in an effort to reinforce her success.

My celebration for Louise was far less expressive. First of all, I cant navigate my wheelchair in to the bathroom the girls use. Secondly, thanks to ALS, all I could really do was to squeal approving noises at Louise when she emerged from the bathroom. No clapping. No jumping around. No picking her up. No giving her a hug.

I got upset, and, a short time later, really angry.
Posted by Unknown at 8:09 PM 1 comment: