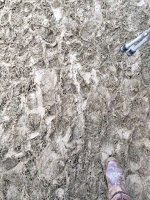 The final day of the Blair Trials featured the last phase of the competition, show jumping. We were lucky enough to have seats in the stands to watch it, instead of fighting through the epic mud created by the previous days' rains.

First, I owed Cora and Louise another trip to the kids area. They were dying to try a few other things, and I certainly thought they earned it after surviving cross country. 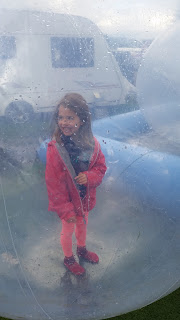 This first thing Cora wanted to try was the bubbles.... just what it sounds like... a guy zipped them into big plastic bubbles, and they got to roll around in a pool of water. They loved it! I've decided that my new career will involve a version of the same attraction. All you need is a kiddie pool, some big bubbles, and a leaf blower to inflate them. Genius!

They also made a few laps of the obstacle course in the bouncy castle. 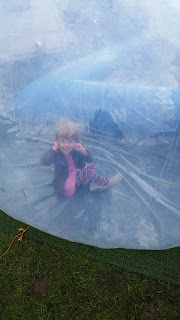 After that, it was off to the rounds of the top riders in show jumping. We were excited to be in our seats early, because the Queen and Prince Phillip were going to be there too. They drove in right past our seats, and were seated in the adjacent seating area.

I'll admit that I was astonished, and I know I shed a few tears. I never thought I would see her, and was so happy I had a hand in giving that experience to the girls. Regardless of opinions of monarchies, she is an amazing lady and an important historical figure... the week before she had just become the longest reigning British monarch.

The show jumping competition was impressive, and the weather (that day) couldn't have been more beautiful. 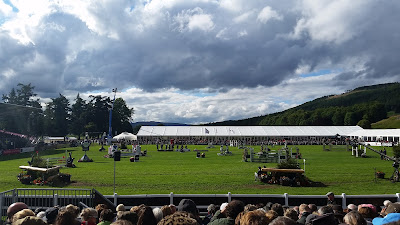 That night was our last night in our little cottage, and we had a great dinner at the resort restaurant.

The next morning, we hit the road again, and I demanded that we take a detour to a famous viewpoint that wasn't far away. Remember that most roads in that part of Scotland would barely pass as public roads here... and even a short detour can involve and lot of twists and turns and more than a few minutes... I think it was worth it though!

Then we headed south to our rendezvous with the Moffats in the Borders. They certainly deserve an introduction, since they are as dear as family to us, and I think the best part of the trip was the time we spent with them.

Many years ago (as the pictures prove), Neil Moffat built a few stone walls for Tony's parents while they lived in the Borders. He ended up coming over here to build some walls for us at our old house. (His work is amazing! check it out... http://dry-stone-wall.co.uk/ ) 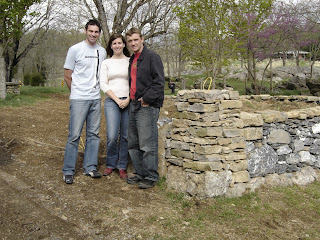 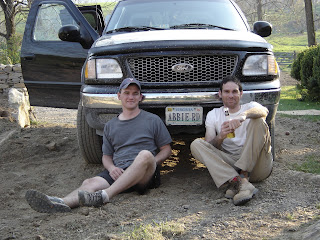 We kept in touch, and saw him when we visited Scotland; and a few years later, he brought his girlfriend, Jill, over for a visit. When they got engaged, they returned here to look at possible wedding venues, and we couldn't have been more excited to have their wedding close to us. They got married just a few miles away, and that week we spent with them and their families really cemented our relationship with the extended clan. We aren't family, but we might as well be! We only get to see them every few years, and were really excited to spend a few days with them all.

It was a perfect break in our trip, which had been a whirlwind of the roads of Scotland. We went on a little trip into England, explored the coast, and had the best fish and chips ever! But generally, we stayed put a bit and just enjoyed the company. Wherever we went, the whole extended family came along, so it would often be 16 people for dinner and a convoy of 5 cars! It was superb though, and I only wish we could have stayed longer!

Thursday, September 17, was our second to last day in Scotland, and we headed into the big city of Edinburgh. Our first stop was the glorious castle, although we were a bit daunted by the crowds. September is high tourist season, and Edinburgh is a very popular place! We walked a little way down the Royal Mile, and then the girls and I jumped on a double decker bus, while the grown-ups went from pub to pub on their way to Holyrood Castle. The girls and I were headed for Dynamic Earth, an incredible science center for kids. It was truly an amazing experience (for Cora especially), and I highly recommend it to anyone with kids! They take you into a time machine where you travel back to the creation of the Earth, and then through the different time periods and climates of the planet. People were always confused when Cora would tell them that we crash landed in a volcano... but that's just how amazing it was!

Our dinner that night was the best of the trip, and Renata said the best of her life! We ate at the Kyloe Restaurant and Grill... again, I would highly recommend it! The waiter could tell us the name of the farm from where our steak came, and everything was superb, from the food to the drinks! It also had the best chips of the many, many, many chips we had eaten in Scotland. Plus the view couldn't be beat!

Our last full day in Scotland, we headed back to Glasgow. We toured Buchanan Street, and Glasgow Cathedral, and we got to spend some time with our buddy, Hannah, who had traveled hours and hours to see us. And, of course, we had to stop by the Celtic Store to pick up a few things!

That night, we visited the house of Tony's aunt and uncle who live in Glasgow. We had a scrumptious dinner with three aunties, two uncles, a great-aunt, and four cousins...  I was so thankful we could see them all. It was the first time Cora and Louise had met most of them, and they absolutely loved it!

The next day, it was off to the airport... spend our last pounds at the duty-free, and climb on that large plane named after a volcano in Iceland.

It was really an incredible trip. And I'm so thankful to our family (Virginia and Scottish branches) for everything. Of course, I thought about Tony nearly constantly, and desperately wished he could have been with us. I know he would have been glad that we went, and so proud of how well the girls did. Scotland will always be a special place for us, and I can't wait until we can return!