The District of Columbia

My family and I visited Washington DC for a sightseeing trip in the middle of June this year.

My parents convoyed with us, and took the girls up to DC in their car. Amanda and I were stuck in parent mode for a while, until we realized the absence of the girls in our van meant we could crank up the volume of the music we were listening to...Amanda will tell you that I'm not happy until the music makes the rear-view mirror shake.

We made it in to DC with relative ease, and saw a marine helicopter flying low overhead. We're told by my folks that the girls squealed with delight at the sight of the helicopter, since the president might be inside.

After getting to our hotel, we thought it would be good to go out for a stroll, particularly after spending a few hours in our cars.

It took us ten minutes to make our way to the Washington Monument. The monument's size is quite deceptive. Maybe it's the simple obelisk shape, or that it sits on such an open area of land on the national mall, but it isn't until you get up close and strain to look up at the peak that you appreciate how tall it is. Random fact: it was the tallest building in the world until the Eiffel Tower came along.

I went out for dinner with my parents that night. We ate at Old Ebbitt Grill, and enjoyed a wonderful meal and lots of laughs.

We all had to get spruced up the following morning, as we were lucky enough to have arranged a tour of the White House. I want to thank my VMI Brother Rat, Brandon, for all his help and assistance, and for accompanying us on the tour.

It was surreal to be perusing through the hallways of such an iconic building. That sensation increased every time I took in a portrait, bust, or view of a formal room.

Because I was in a wheelchair, Amanda and I had to use the elevator - escorted by a member of the Secret Service - to go up to the main floor. It turned out to be a stroke of luck; the elevator was in an area that was cordoned off, and not accessible to other people touring that day. But the really fortunate part of our elevator ride is that we got to see some of the scorch marks from when the Brits burned the White House. The blackened marks were two months shy of being 200 years old.

The tour was amazing. The interior was a wonder to tour, but it was also bizarre to look out of the windows and soak up many priceless views of the grounds.

We grabbed sandwiches for lunch, before heading to the Air and Space museum that afternoon.

The entrance to  the Air and Space museum is deceptive. There's a short wait for a security check just inside the entrance. It isn't until you emerge from the security check that you realize the vast expanse of the lobby, and the many amazing artifacts around you: space capsules, the first aircraft to make a transatlantic crossing, the first aircraft to break the sound barrier...the list just keeps going and going. Sadly, the WWII exhibit was closed, so we didn't get to see their P-51 or other period aircraft.

I really need to stop before I enter full geek mode, and bore the socks off you. But you can get an idea of the scale of the collection here.

My brother and his family arrived that afternoon. My wheelchair cab, even though it was booked in advance, was behind schedule, so we used the time to take a quick stroll to the capitol building. 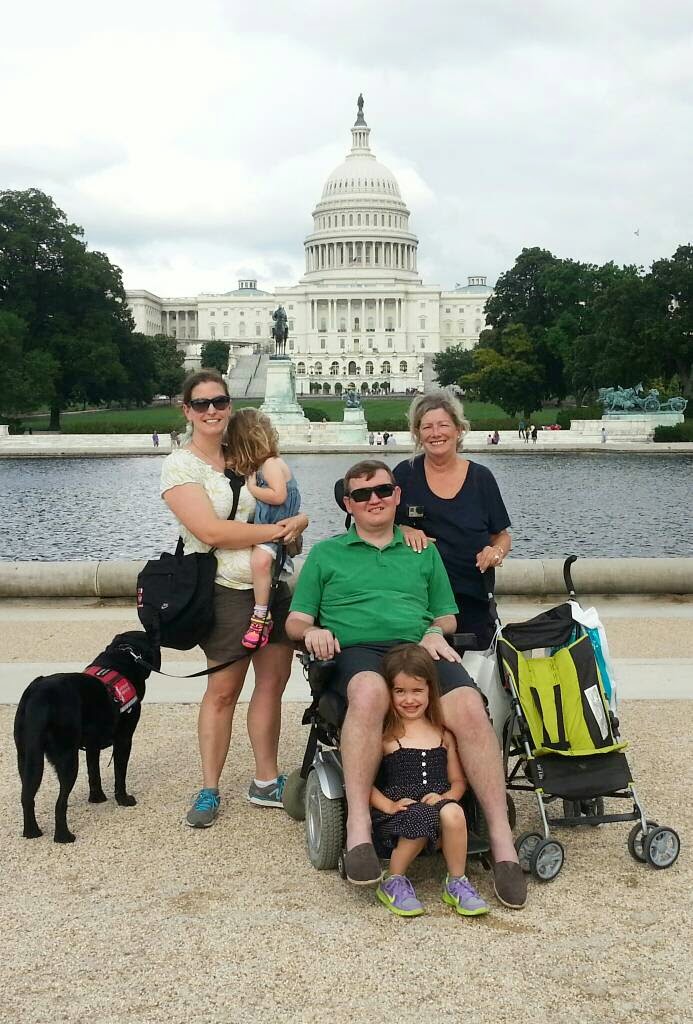 Eventually, we gave up on the wheelchair cab. My parents went back to the hotel with the girls, and my Dad returned to pick us up in our own van.

The following morning, Amanda, the girls, my parents and I went to visit the Lincoln Memorial. The weather was overcast, so we were reprieved from the typical, suffocating DC humidity. We seemed to arrive at the memorial before the morning rush of tourist, so we were able to soak up the sights and have an enjoyable walk without much hassle.

After Lincoln, we walked the length of the reflecting pool before visiting the WWII memorial. I've visited the WWII twice. Each time there has been at least one group of veterans visiting the memorial. Their presence always removes that abstract lens through which I would otherwise view the memorial. I'm glad to see them. Their presence removes any facade of celebrating the war, and lays bare the human cost of war.

The Jefferson was the last stop on our walk. Having been let down by a cab the previous day, my Dad took a quick cab ride back and returned to pick us up in our van.

That afternoon we met my brother and his family at the Natural History Museum.

The museum is huge, so we had to whittle down all of the exhibits into a shorter list we could manage in a couple of hours. It really was fascinating to go through those exhibits, and particularly enjoyable with the girls experiencing the museum with their cousins. Even in a short space of time, we were able to see dinosaur bones, the insect exhibit, and the mineral exhibit along with the Hope Diamond. 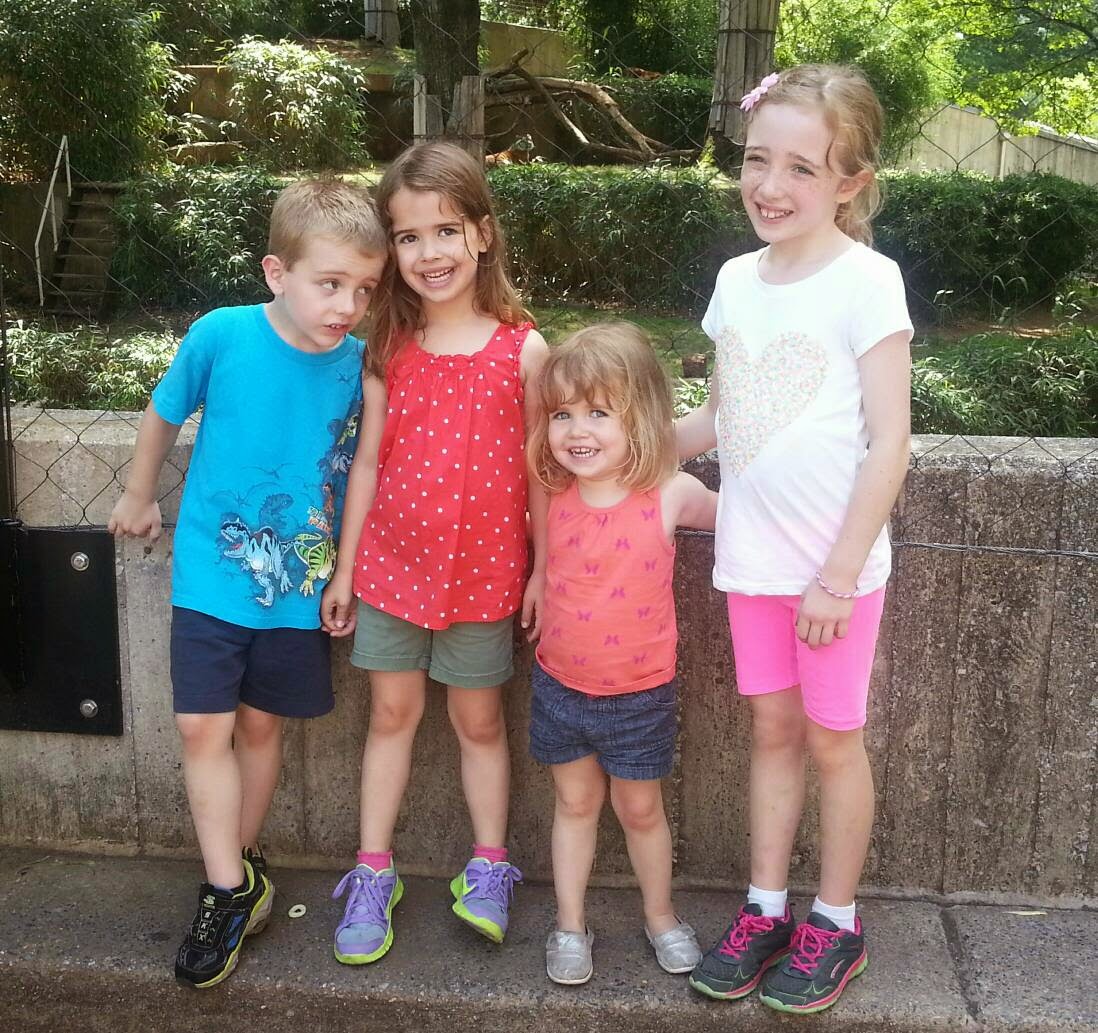 The following day, we were all excited to go to the National Zoo. Even though by its nature, a zoo is a collection of enclosures, the National Zoo is free to enter. So there were no noticeable entry gates. That must be the reason I was scared shitless when we passed by a fence and there, walking towards me, was the biggest wolf I've ever seen.

Before we knew it, we were checking out pandas, elephants, apes and gorillas, tigers, and a huge assortment of other hairy animals. To its credit, I found the Zoo to be remarkably accessible in my wheelchair.

We grabbed lunch at a zoo restaurant before winding our way back to the cars, and back to the hotel. That evening, the girls and their cousins spent some quality time in the hotel pool. That night, Friday, we enjoyed a family dinner at Hamilton's. If you ever visit D.C., Old Ebbitt Grill and Hamilton's have an awesome menu and an awesome atmosphere. The following morning, my parents, brother, and his family were heading back to Charlotte. Since that Sunday was Father's Day, it was the perfect opportunity to celebrate Father's Day.

The Charlotte Conways left on Saturday morning; it was a wonderful whirlwind visit. Since we had some time before we had to check out, we took in one more attraction, the National Archives.

We got there shortly after the Archive opened, but there was already a line of people waiting to get in that stretched across the front of the building. I didn't see any signage indicating the accessibility of the entrance, so I went up to a quieter door to inquire. The security guard surprised me by saying that we could quickly use his side door. It was a really kind gesture. We skipped to the front of security, and made our way to the rotunda. In no time at all, we were looking at the original Declaration of Independence, Constitution, and Bill of Rights. The documents were dimly lit and in the rotunda, which was dimly lit, the pieces of paper had an almost spooky glow about them.


It wasn't until we were leaving the archive that we noticed the exhibit by the entrance/exit. They had a 13th century copy of the Magna Carta on display.

The visit to the Archive was our last excursion in D.C. We quickly loaded up the mini van and set off for home.

Given how tired we all were, it was nice to have a trouble free trip home.