Last weekend, I took the girls skiing for the first time... well... I did contemplate getting out there with them myself, but it didn't take long to realize that would be sheer lunacy. So, I went skiing, and they went to ski school. 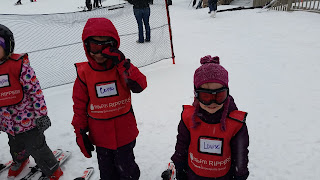 We planned the day a few weeks in advance, and really lucked out to be there as the first snow of the season fell. It was so lovely to be back on the slopes again. I think it was probably 10 years ago that we last went. I really cherish those memories with you... before we had kids, and before ALS of course.

The girls had fun, and were both keen to show off their skills when I arrived to pick them up. I snuck past the school area a few times, so I had already seen them in action. Cora was her typical, fearless self and I saw her waving over at Louise, who I am sure was less thrilled with the proceedings.


I am very proud of your skiing skills, especially since I taught you! It was certainly the only time in our relationship when I felt more athletic than you... but you learned quickly, so that didn't last. I had a student again this time, and hopefully he will love it as much as you did.

When the girls are a little older, we'll all ski together. Skiing and swimming are the most athletic things I'll ever do with them, and I know with your genes they'll be better than me in no time!